For the research project this year, I decided to investigate on a social problem: sexual harassment. I find this topic to be something that mainstream media do not usually discuss. Moreover, it is in our culture to not commonly converse about such topic with the rest. On this topic, I mainly focus on verbal harassment. Just like physical harassment, verbal harassment is a common form of sexual harassment. Victims of verbal harassment, though may not experience any form of physical harassment, can be still be traumatized by the experience. I am focusing on female high-school students. I chose female high school students as my research target. The reason behind this is because in an environment like high schools, girls are surrounded with more boys and may can easily find themselves criticized verbally, when there is no adults around. Throughout this research project, I would like to examine the experiences of the verbal-harassed victims, and the effects it had on them afterwards, while also comparing the differences of verbal harassment between the city and the province.

A new school called “Bambujaya” is opening up and needed to hire curriculum developers to rewrite all the Khmer grade one textbooks, Khmer Literacy, Math and Science and Social Studies. The modifications made were mostly due to gender equity and stereotypes, words that aren’t commonly used, and images that look harmful or aren’t associated with Cambodia. Since photo enhancement is necessary in order to rewrite the textbooks, we have recruited some Liger students to illustrate pictures and take photos for us with a clear written contract. With two weeks left, instead of continuing to revise the textbooks, we have chosen main content (chapter) from each textbook and adding activities to it. Then, we convert all the ideas we brainstormed into Prezi presentations. The Exploration ended, but it continues into an Expertise because we need to keep improving and finalize the product.

ssential Questions: What are the main factors that causes Cambodians in poor and What will be the new vision to improve poverty situation in Cambodia.
Exploration name: Poverty in Cambodia
Exploration Dates: 9 February- 31 March 2015
Number of students: 13
Course Description: In this project students will learn about the problems in their community which make people in poor condition as well as the poverty situation in Cambodia. We will do research of other countries too to see the differences or similarities of poverty in other society in the world. Moreover, students will do study trip to Ministry of labor and vocational training, Ministry of Rural and development NGO in Cambodia. We want to get to know the work that Ministries are doing, their mission, vision and solution, and the function of NGO. We will go to Kompong Chhang province to interview people at Community Poverty Reduction to know about their work with HIV people and the money saving group; how this NGO helps community’s living, keeps it moving forward, and be a model for others. 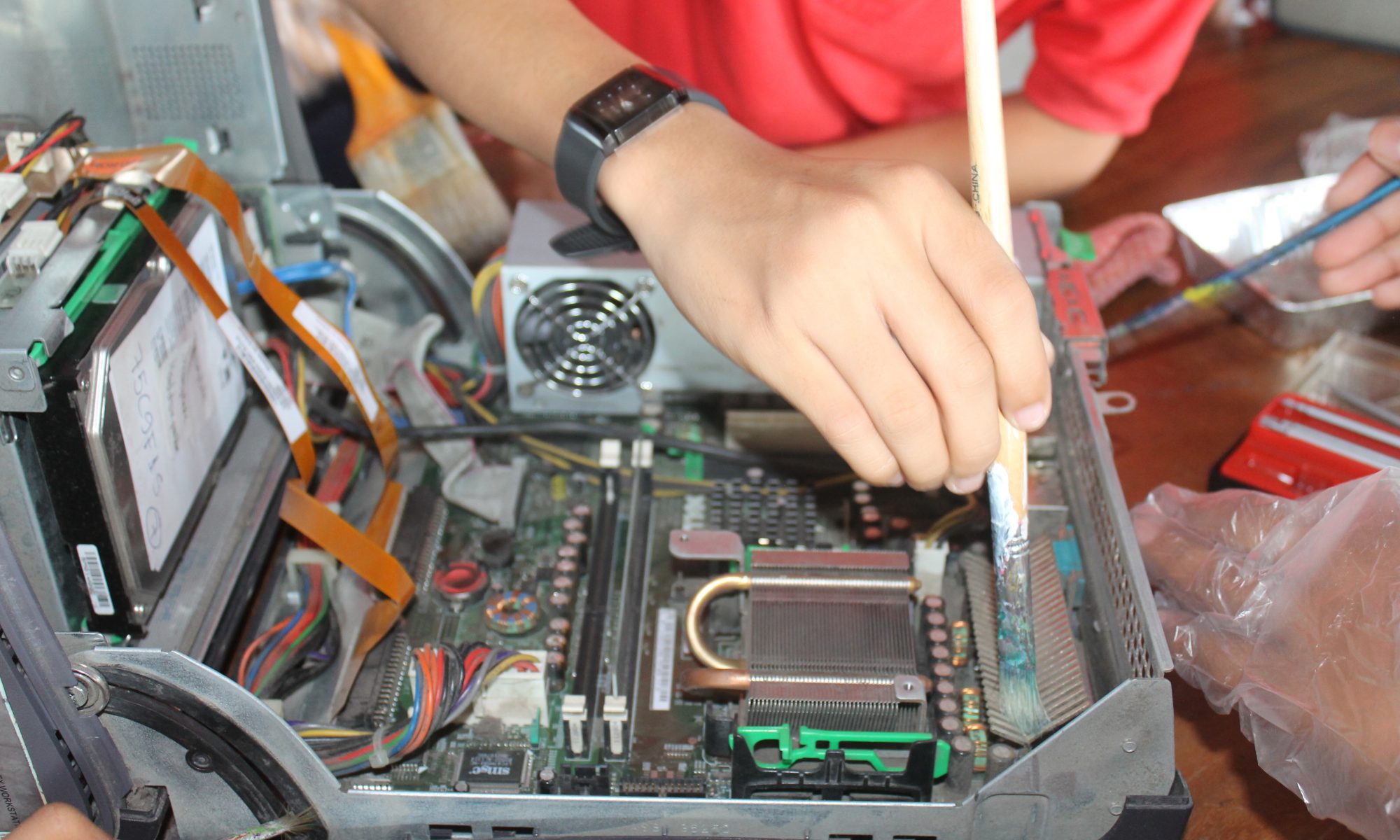 Description: Tech Support was the first Exploration of the second year. In Tech Support we learned about technology and helping other organizations, NGOs and Liger with their technology problems. On the first day Max, our facilitator taught us a little bit about the ideas that he made this Exploration. On the next day we started to learn more about technology. We learned about the parts of computers (hardware). On the second week we had a trip to Singapore! Before that day we prepared our clothes in our backpacks. When we arrived at the airport our parents came to say goodbye to us. We were so sad but we were also happy. On the plane people were talking to each other, some people hurt their ears because it’s hard to hear up there in the sky. When we arrived in Singapore we had to wait for the checker to check our passports. After we finished the check step there was a big surprise for us because Robert (the former head of Liger) came and was waiting for us. He came and said hello to us, we were shocked. About 15 minutes later we went straight to UWCSEA South East Campus. We went there because we want to collaborate with them so we can help NGOs and organizations in Cambodia. There were seven members that worked with us. The first day that we met them we played some games to know and get familiar with each other. Then we found out our host family that we were going to sleep with for two days. Our host families were so friendly and kind. We went there and learned with an IT expert more about the hardware of the computers. On the third day we camped in UWCSEA. Also we went to the science museum to learn and have fun. Sadly on Wednesday we had to leave Singapore. When we came back we went to two organizations to help them. One of them is Tiny Toons. They have problems with their computer. We took five computers to fix at Liger. Luckily we fixed two of them already! The other organization is Green Umbrella, and they have a problem with their website so we helped to fix it.

If you want to know more about UWCSEA, Tiny Toones and Green Umbrella click on the website below.

1. How are organisms and the nonliving environment interconnected in the world around us?

2.  What is the value of tropical forest ecosystems for Cambodia?

Essential Questions: How does social business alleviate poverty? What is the role of women in microcredit systems?

1. Are biogas and solar energy sources practical and cost effective in Cambodia?

2. What are the benefits and drawbacks to using biogas and solar energy in Cambodia?

Description: In our water group we learned about the pH of water. The full words of pH is Percent Hydrogen. That is the kind of scale that people use to measure the acids and bases. The scale of pH is 0-14. From 0-7 is acidic, 7-14 is basic and 7 is neutral. The hydrogen (H+) is acid and hydroxide (OH-) is base. When we learned about pH we did the experiment with 13 liquid things. For ex: the coca-cola and pond water. The coca-cola was 2.0 so it means acidic. If we drink it a lot like every day we would get sick but if we drink in 1 week only 1 it will be good. The pond was 10.0 so it means basic and if it has a lot of basic like this it also not good for our health either. So we can eat or drink only higher than 7 to 9 or lower than 7 to 5, so it not really have many bases or acids. In this class we also studied about algae. Algae is the kind of plants that live in water and it uses the sun as it food. When this plant lives in water it will make water become basic. We studied our own pond at Liger to learn about this. One other thing that we learned was the water cycle. We learned when the sun rises then it does the evaporation with water. When water goes up it is not yet become the clouds but when the temperature is cool then it makes condensation so it becomes the cloud. When the cloud in the sky catches the cool temperature it will become the rain again. To learn about water we went on the trip to RDI. RDI is the place that makes the water filters to sell. One thing that we learned from there is why they made this RDI place because they saw that some people here don’t have the clean water to drink so they can buy it to get the filter and clean for them. Another reason is when they sell the water filter they sell as cheaply as they can to help the people in Cambodia.

1. How will jobs that help Cambodia look different in the future?

2. What motivates people to choose the job they do?

During the round four exploration we learned about Future Jobs. In Future Jobs we had to develop the presentation questions (ask more questions). We asked more questions because in our Exploration we had a lot of trips that taught us about the jobs in the real life. After that we learned about Nanotechnology, Water crisis and Alternative fuels. Nanotechnology is smaller than atoms. One thing we learned was that it is waterproof and can go underground without breaking. In Water crisis topic we learned that 70% of the Earth is seawater and 30% is land. But just 3% is good water. 884 million people don’t have good water and nearly 1,000,000,000 don’t have water. The last topic was Alternative fuel. We noticed that the gas can live 60 years, oil can live 60 years and coal can live 1000 years. Last we prepared for our job shadow on the next day. Job shadow means to go to the real place of work to do the job with the people that are in the job that helps Cambodia a lot. All of us went to different places with our partner. For example, some of us went to World Vision and some went to Northbridge International School.

In our Exploration class, we had three things to work on. The first area was global connections. Global connections mean that we share what we do at Liger with people around the world by using Facebook, Instagram, Youtube and blog. The first thing we used is Instagram because we can post the picture and caption to show what we do at Liger. The second area we practiced was literacy coaching. Literacy coaching is about teaching other students about literacy. This means when students need help to edit a blog or presentation we help them edit and give them some feedback or advice.The last is Presentation skills. The presentation skills we learned about are stance, eye contact, fidget, speed, and volume. Our goal was to share Liger to the world, have more people come to our Exploration Celebration and get more followers on Instagram.