Initially, things didn’t process as smooth as we planned. Did not catch up with the schedule, did not collaborate well, did not balance between how much work we had to do and how much time we had left, etc.

Bangkok awaited. The competition day has arrived. But how can a team encountering so many challenges find their way out to achieve the trophy?

During the competition, every member of Beta-B has worked relentlessly as a team, fixing most of the mechanical issues. The programming for the autonomous round (robot runs on its own without a person manipulating), however, didn’t run correctly.  At this point, hope was withering, regarding the facts that we were all inexperienced. Fortunately, our first qualifying match was a victory. The games went on until lunch. Problems kept coming on our way, but we’ve never given up. By our last qualifying match, we have ranked the 11th place (out of 20 teams).

But this time, we handled the situation differently. We were as satisfied and cheerful as we could be, considering that we’ve come this far as a team, overcoming not just mechanical problems, but collaboration as well.

Regardless of that, luck was on our side. The system of the game was allowing the higher ranked team to form an alliance of three teams. I wasn’t sure if we’re going to be chosen or not, but one of my teammates told me “Go and take a seat, fix our robot, chill and look cool. Someone’s gonna come and ask us to be their alliance.”

Apparently, a lot of teams wanted us. Now that we consider that, Beta-B was the only team who could stack the high cones on the stationary goals, which could earn extra points. By being an alliance with the first-place team and the second-place team, we kept striving until we became the tournament champion as an alliance, the most unexpected awards of all.

Not winning was fine, since we were all very pleased with the result we got, and the accomplishment, but to win the tournament was astonishing. It wasn’t just luck that led us to this, but the collaboration, encouragement and the guts to never give up. 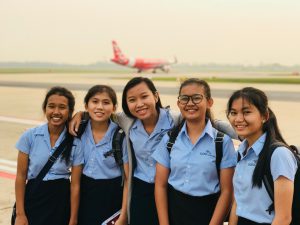